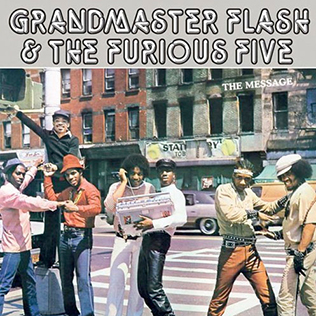 Song Of The Day Challenge- Day 5- A Song Everyone Should Listen To At Least Once In Their Life: “The Message”- Grandmaster Flash & The Furious Five. I wanted to pick a song that wasn’t a hit- “The Message ” only made it to #62 on the Billboard Hot 100. Something that just maybe everyone hasn’t heard before.  While I am not a big rap fan I did like a number of rap artists in the 1980’s up until the early 90’s. The first rap album I ever bought was this one- The Message- by Grandmaster Flash & The Furious Five. I had read about the song in a music magazine. The radio wasn’t playing it. At this point we didn’t have MTV.  I was intrigued enough to go out and buy the album without hearing it- and I wasn’t disappointed. Overall the album is a good one but it was worth the price on the title track alone. The Message was a game changer in rap- it was the first rap song to provide social commentary. This song is over 7 minutes long but it never seems like a long song. When I go to rank my Top 10 songs of the 80’s no doubt it will be there.

2 responses to “SONG OF THE DAY CHALLENGE- DAY 5- A SONG EVERYONE SHOULD LISTEN TO AT LEAST ONCE IN THEIR LIFE: “THE MESSAGE”- GRANDMASTER FLASH & THE FURIOUS FIVE”