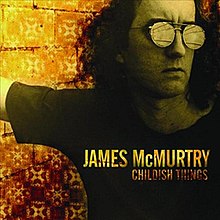 Song of the Day Challenge- Day 5- A song everyone should listen to at least once in their lives: I am cheating today and putting up two songs. In listening to “The Message” by Grandmaster Flash & The Furious Five- it put me in mind of another song- this by folk singer James McMurtry. McMurtry is the son of author Larry McMurtry. I first heard about McMurtry around 1990 when I read an interview with John Mellencamp where he had praise for McMurtry’s songwriting. His debut had come out in 1989. So of course I ran out and bought it. McMurtry is one of those great singer-songwriters who hasn’t had any hits or sold millions of albums but about everything he’s released has been critically acclaimed. “We Can’t Make It Here Anymore” was a track on his Childish Things album from 2005- but fifteen years later remains as relevant as it did back then. “We Can’t Make It Here” is political- a working class anthem. The song came out in the George Dubya Bush era but at least in my opinion its not a political thing against one individual- our politicians for decades- Democrats and Republicans have been selling the country down the river for decades. The lyrics to “We Can’t Make It Here Anymore” as spot on.   Critic Robert Christgau called this song the best song of the 2000s.

14 responses to “SONG OF THE DAY CHALLENGE- DAY 5- A SONG EVERYONE SHOULD LISTEN TO AT LEAST ONCE IN THEIR LIFE: PART II: ” WE CAN’T MAKE IT HERE ANYMORE”- JAMES MCMURTRY”