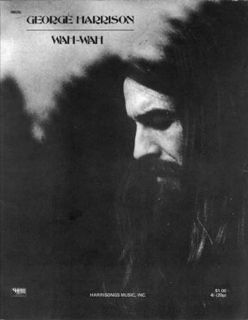 To begin with it was difficult making this list- but it was really hard excluding anything from George Harrison’s -All Things Must Pass album. Nearly every song on it I gave consideration to. I’d rank it in my Beatles Solo- Mount Rushmore of albums- and it may indeed be the best Beatles solo album.

“Wah-Wah” was a song that George had written in early 1969- during his brief departure from The Beatles. He was frustrated at being bossed around by Paul who was being critical of George’s guitar playing and with John’s lack of interest in the project they were doing- and his dismissal of George’s songwriting. At this period George had really grown as a songwriter. He had been looked at by John and Paul all along as a junior partner. He was the youngest and John and Paul for a majority of the time the band existed were the main songwriters. By this time George was coming into his own-and John and Paul were reluctant to have things change.  No longer would George be satisfied with one song per album. “Wah-Wah” was George’s personal and artistic statement on his new freedom from The Beatles. It was the first track George recorded for what became All Things Must Pass. The album was produced by Phil Spector.  It was also the first song he played in concert as a solo artist- at the famous Concert For Bangladesh.