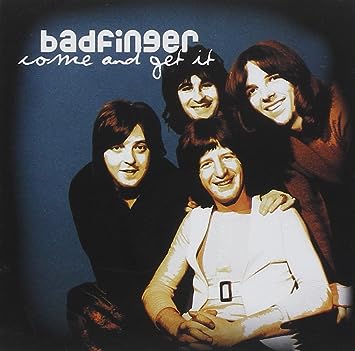 The band The Iveys from Swansea, Wales- signed with The Beatles Apple label and became “Badfinger”- “Bad Finger Boogie” was the original name The Beatles had for their song “With A Little Help From My Friends.”- The Iveys had started as a band in 1961. They would record five albums from 1968-73 and have 4 Top 40 hits- their biggest being “Day After Day” #4 in 1971.

“Come And Get It” was written by Paul McCartney who originally recorded it for The Beatles Abbey Road but gave it to Badfinger to record. The Beatles version appears on the Anthology 3 compilation.  Paul also was the producer for Badfinger on this great power pop song. Paul had all four members of Badfinger sing “Come And Get It” before finally deciding Tom Evans was the one to sing it.  Badfinger had a very tragic and sad history- Pete Ham and Tom Evans would both hang themselves- Ham in 1975 at 27 years old and Evans in 1983 at 36. A great and underrated pop band. Note- their song “Baby Blue” saw a resurgence in 2013 when it was featured in the closing scene of the final episode of “Breaking Bad.”