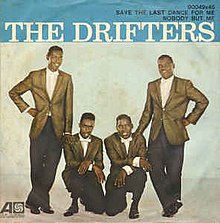 The story behind this song is as great as the song is itself- the great songwriter Doc Pomus who is in the Rock and Roll Hall of Fame for his songwriting- had polio as a child and had to rely on crutches to walk as an adult due to post-polio syndrome. Pomus married a Broadway actress and singer Willi Burke. According to Lou Reed -Pomus wrote the song on his wedding day. The wheelchair bound Pomus watched his wife dance with their guests but reminds her in the song who will be taking her home at the end of the evening.

The Drifters hit was sang by Ben E. King who had left the group for a solo career by the time the single was released. Originally The Drifters had tagged this as a b-side until Dick Clark turned the single over and said that “Save The Last Dance For Me” was the stronger side. The single was produced by the legendary songwriting team of Leiber and Stoller.