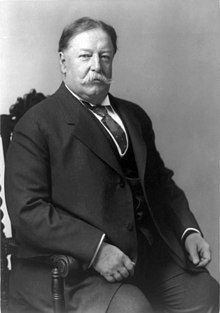 William Howard Taft was the 27th President of the United States. He was a protege of #26 TR Theodore Roosevelt and when TR decided to not run for re-election in 1908 Taft was his man. Reported by at one point TR called Big Bill in and offered him the choice of being on the Supreme Court or being the next in waiting for President. Taft’s life long dream was the US Supreme Court and that is what he wanted but Mrs. Taft had higher ambitions and Taft ended up choosing the shot at being TR’s successor. His four years as president were not happy ones- his good friend TR turned against him and in 1912 challenged Taft for the Republican nomination- Taft won and then TR ran as a third party candidate- which ensured the election of Democratic candidate Woodrow Wilson. A few random fun facts about Big Bill Taft. 1- He was indeed the heaviest POTUS- at one point he was up to 340. He was 5’11”– but they never tell you that after his presidency he would lose weight- lose around 100 pounds and become an avid walker. 2- He got his dream the U.S. Supreme Court in 1921 when President Harding appointed him the Chief Justice. He is the only POTUS ever to serve on the Supreme Court. 3- The urban legend isn’t true- Taft didn’t get stuck in a bathtub while president- but he did have a specially made bathtub. 4. Before becoming POTUS Taft had served as Secretary of War- only one other Secretary of War became a POTUS- James Monroe.  5- Taft is the last POTUS to have facial hair-he had a big mustache. 6- In his four years as POTUS- Taft appointed 6 men to the U.S. Supreme Court- only Washington and FDR have appointed more. His son Robert Taft served as a U.S. Senator from Ohio 1929-53 and was the Republican Senate leader and a presidential contender before being stricken with cancer which turned out to be fatal. Bob’s son- Bob Jr- also served in the U.S. Senate from Ohio 1971-76,  Bob Jr’s son Bob III – was Governor of Ohio from 1999-2007.