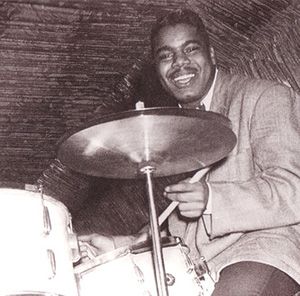 Hans Remembers- On this day 50 years ago today- Sunday April 20, 1969- Motown drummer Benny Benjamin died of a stroke at the age of 43. Benny Benjamin during his life was one of the unsung heroes of rock and soul. He was the drummer for the Motown musicians called The Funk Brothers.  The Funk Brothers were the studio musicians who played on all the big Motown hits of the 60’s- they didn’t receive credit on the albums until 1971 when they were credited on Marvin Gaye’s landmark What’s Going On album. Benjamin, nicknamed Papa Zita played on such tracks as the first big Motown hit- “Money-” by Barrett Strong, “My Girl”- The Temptations , “Going To A Go-Go’ Smokey and The Miracles, “Do You Love Me” -The Contours, “I Heard It Though The Grapevine”- Gladys Knight and The Pips and countless others. Towards the end of his life his health was fading due to alcohol and drug addiction and he contributed less and less.  He finally got his due in 2003 when he was inducted into the Rock and Roll Hall of Fame as a sideman. There is a great documentary out there about The Funk Brothers- Standing In The Shadows of Motown which came out in 2002.