1- Johnny Bench – As far as the greatest catcher in Major League Baseball history is- my vote would go to Johnny Bench. I am not sure about baseball history- Josh Gibson would have to be considered but sadly due to the color line he wasn’t never given the chance. Bench was a great hitting and fielding catcher. He played his entire career with the Reds-coming up at the age of 19 in 1967- was the NL Rookie of the Year at age 20 in 1968. He won the first of his two NL MVP Awards in his third full season 1970 at 22. A great Bench stat- he was a catcher and wasn’t a speed burner on the bases but was a great base runner- in 1975 he was 11 for 11 in stealing bases and in 1976 he was 13 for 15. A two year period he was successful 24 out of 26 times- and those bases were stolen when they meant something in the game.

2. Joe Morgan- The Little Machine that made the Big Red Machine go. The greatest player of the 1970s? A great all around player- although only 5’7″ -he had some pop-268 home runs- with the Reds in the 70’s he was good for 20 plus home runs a year. A great base runner and base stealer- he wasn’t a player who stole bases to add to his stats- he stole bases in key situations in the game not when his team was winning or losing 7-0. Career on base percentage .392. Won 5 Gold Gloves. One of the smartest- baseball smart players ever.  With apologies to Rogers Hornsby- Morgan is the greatest second baseman of all time. Won back to back MVP’s in 75 and 76. He spent only 8 of his 22 seasons with the Reds but when you think of Morgan you think of him in a Reds uniform. A life long Pirates fan I hated the 70’s Reds but certainly admired the great team they had- especially Bench and Morgan- how could you hate those guys? The three most distinctive batting stances of the 70’s- Stargell’s “Windmill”- Yaz- with his arms and bat held high- Joe Morgan and his chicken flap. 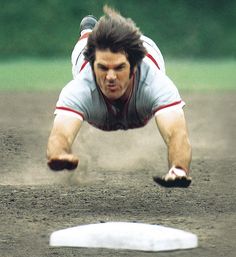 3. Pete Rose– The Hit King and also the Out King. I am so sick of this man I can’t bring myself to write anything. He is rightfully barred from Baseball’s Hall of Fame. He broke the cardinal rule of baseball- betting on games- and lying about it for 20 years.

4. Barry Larkin- Like Bench- a life long Red. 19 seasons -a career .295 hitter. 12 time All-Star,  won an MVP, 3 time Gold Glover. A fine all around player who is a tad underrated I think maybe because of the team he played on and maybe because of Ozzie Smith.  Was elected to the Baseball Hall of Fame in his third year of eligibility. In selecting the Reds Mount Rushmore it seemed pretty clear cut to me the four that belonged- Bench- Morgan- the foul  smelling Rose and Larkin.