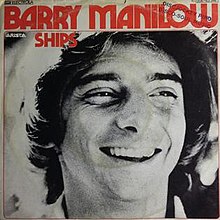 Songs I like by Artists I Don’t-” Ships” by Barry Manilow. “Ships” was written by rocker Ian Hunter and on his outstanding “You’re Never Alone With A Schizophrenic.” The song was written about Hunter’s relationship with his father. Hunter by the way is still going strong -he turns 80 in early June. I was shocked when I heard Barry Manilow was covering an Ian Hunter song- and it was released as a single by Manilow just months after Hunter’s album came out. Manilow chose this song because of his relationship with his own father or lack of one. His father had been out of his life since the age of two- and in 1975 showed up at his dressing room door-30 years later after a concert and told him- “I’m your father. I enjoyed your concert and would like to see you again”- and left. Manilow was a huge success in the second half of the 70’s- he was all over the charts-consistently. Easy listening stuff that wouldn’t offend anyone- probably the key to his success. I certainly prefer Ian Hunter’s original of Ships- but Manilow’s version is his best song- plus it no doubt made Ian a lot of $$$$. Manilow’s “Ships” peaked at #9 on the Billboard Hot 100.