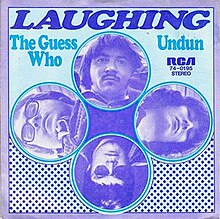 1969 Song of the Day is “Laughing”- by The Guess Who. Laughing went to #10 on the Billboard Hot 100 and went to #1 in their native Canada. It was their second Top 10 hit- following “These Eyes” which went to #6 earlier in the year. The song was written by band members Randy Bachman and Burton Cummings.Cummings sang the lead vocals on Laughing.  It was a quick song to write- it took them only ten minutes. The Bachman- Cummings team would be short lived- in 1970 at the height of their popularity with American Woman going to #1- Bachman left the band due to other band members life styles conflicting with his Morman beliefs. He would go on to form Bachman- Turner Overdrive.