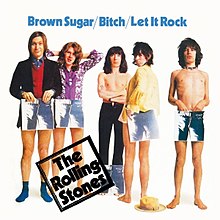 The Rolling Stones Song of the Day is Brown Sugar. Brown Sugar is the lead off track on the bands Sticky Fingers album which came out in the spring of 1971.  Written by Mick Jagger and Keith Richards- Brown Sugar was the first single off of the album and a #1 hit. Brown Sugar is also one of the great guitar songs of all times. The song was written mostly by Mick while he was working on the film Ned Kelly. The song was originally recorded in 1969 and they played it at the infamous Altamont concert in December 1969. The Rolling Stones didn’t release it until 1971 due to legal issues that were going on between the band and their former record label. The song was written by Mick with his secret girlfriend Marsha Hunt in mind-the mother of his first child. As far as the lyrics go you really have to listen closely and often to figure out what Mick is singing- at least it took me- and Prez from The Wire some extra close listening. The Wire is my all-time favorite television show- and one of my favorite scenes of dozens of favorite scenes- involved Prez- who on the streets is a screw up but working on cracking the wire is brilliant-  I will attach the scene where he cracks the code on a wire- and relates it to listening to Brown Sugar.