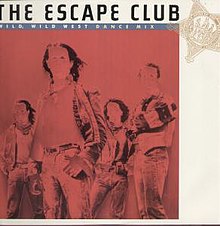 Hans Worst Hits of the 80’s- “Wild Wild West”- The Escape Club. Wild Wild West from The Escape Club’s debut album- went to #1 in 1988- they made history as the only British artist to have a #1 in the United States while never charting back in their home country. The British in this case had good tastes because this is annoyingly bad. The Escape Club would have two other hits later in the US- the biggest being I’ll Be There #8 in 1991. I don’t remember that one. Critics have noted that Wild Wild West in parts-the drum beat and vocal patterns- closely resembles Elvis Costello’s “Pump It Up.”