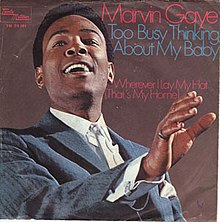 1969 Song of the Day- “Too Busy Thinking About My Baby-“- Marvin Gaye. Written by Motown songwriters Norman Whitfield, Barrett “Money” Strong and Janie Bradford-the song was first sung in 1966 by The Temptations. It was also recorded by Jimmy Ruffin in 1966 but that recording wouldn’t be released until 1997.  Like many Motown 60’s songs the song would also be covered by other Motown artists- and in 1969 Marvin Gaye would have a big hit with it- taking it to #4 on the Billboard Hot 100. It was his second biggest hit in the 60’s behind the mammoth #1 hit “I Heard It Through The Grapevine.” On all three of the Motown versions of the song- in the background playing the music were The Funk Brothers.