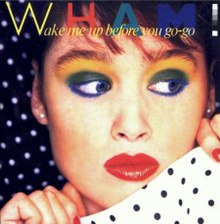 Hans Worst Hits of the 80’s- “Wake Me Up Before You Go-Go”- Wham!  Last fall on a weekend trip this song came on the radio a couple times and that had me singing it the entire weekend and to top it off I’ve always disliked the song. Jitterbug.. Now some of George Michael’s later solo stuff wasn’t bad but I was not a fan of Wham! This song went to #1 in the US and UK and a number of European countries. It was the first of three #1’s that Wham! would have in the US.  The worst part of the song- ‘jitterbug… jitterbug,, jitterbug, jitterbug” they lost me with the first ‘jitterbug.” Actually the song isn’t half bad but for those damn  jitterbugs.