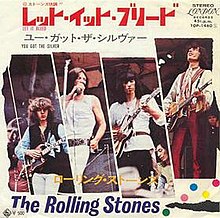 The Rolling Stones Song of the Day is -Let It Bleed. Let It Bleed, written by Mick Jagger and Keith Richards is the title track from The Rolling Stones eighth British- and tenth American album- it is the song that closes side 1. The song comes off as rather sloppy but as critics have pointed out- in this case it works for them not against them. Mick’s singing seems lazy but is very effective.  Ian Stewart makes his only appearance on the album playing piano, Ry Cooder plays slide guitar and Bill Wyman plays the autoharp. What is the song about- there are a number of drug and sexual references. Some of the lyrics were kind of out there considering the time – it was 1969 after all.