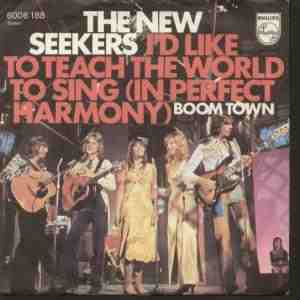 Han’s Worst Hits of the 70’s- I’d Like To Teach The World To Sing [In Perfect Harmony} by The New Seekers- or Hillside Singers- take your pick of the poison. In listening to the replay of American Top 40 yesterday morning -both versions were on the Top 40 and at the positions they would peak at– The New Seekers were at #7 and Hillside Singers at #13.  You will of course remember the song most as a commercial for Coca-Cola. The song was originally a commercial jingle ‘Buy The World A Coke” the commercial was popular so both The New Seekers and Hillside Singers just had to re-record it as a song while dropping the advertisement for Coca-Cola. The Coca-Cola ad campaign is still considered one of the most successful in television history- and the two hit songs even though dropping references to Coca-Cola- well the seed was still planted and you thought Coke when you heard this song. Its bad enough that one version was hit- let along two at the same time.This song had to bring a lot of money into Coca-Cola over the years,millions, billions?  I haven’t drank pop/ soda since 1998.

The commercial by the way had started airing in July of 1971. The key to the success of these milquetoast singles has to be they were released around Christmas. Good feelings and all and in The Age of Nixon and Vietnam- people must have wanted to hear a song of peace, love and understanding.

The New Seekers had two other hits in their career- in 1970 What Have They Done To My Song, Ma #14 and after this in 1973 and I still haven’t felt brave enough this morning to listen to this- a cover of The Who’s Pinball Wizard/ See Me, Feel Me.  The Hilltop Singers- only had the one hit- this one.

I was in fourth grade and we had a music teacher who came into class once a week. She was a traveling music teacher. She would go to a different school each day and once a week she was at our school. She came into class one day and had a 45 with her. She was all excited she wanted to teach us how to sing this ‘great new song” and she even had handouts to pass out with the lyrics on it. The song was this one “I’d Like To Teach The World To Sing”- I am not sure which version it was but first she played the song and then she ‘taught’ us how to sing it. I certainly wasn’t a ‘hip’ 4th grader but I could even tell at that age upon hearing the song one time it was lame ass awful. She was all excited though and we could sing the song by the end of the period. I hated the song then and still do today.