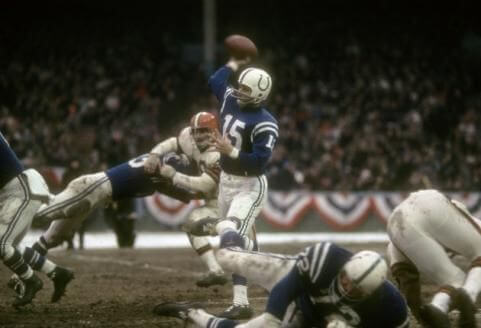 It was fifty years ago today- Sunday December 29, 1968 the Baltimore Colts visited the Cleveland Browns for the NFL Championship game and the right to represent the NFL in Super Bowl III. It wasn’t much of a game at all with the Colts who had been the NFL’s best team during the regular season going 13-1- destroying the Browns by the score of 34-0. The Browns had been the only team to beat the Colts in the regular season but the Colts got their revenge on this day. After a scoreless first quarter the Colts scored 17 points in the second quarter- scoring two touchdowns on runs by Tom Matte-  Matte would add another touchdown in the third quarter. The Colts were led by head coach Don Shula and reserve  quarterback Earl Morrall  who that season filled in for the injured Johnny Unitas- and was the NFL MVP that season. The Colts would advance to Super Bowl III where they would face the winner of the AFL Championship Game- Oakland or NY Jets- at the Orange Bowl in Miami.