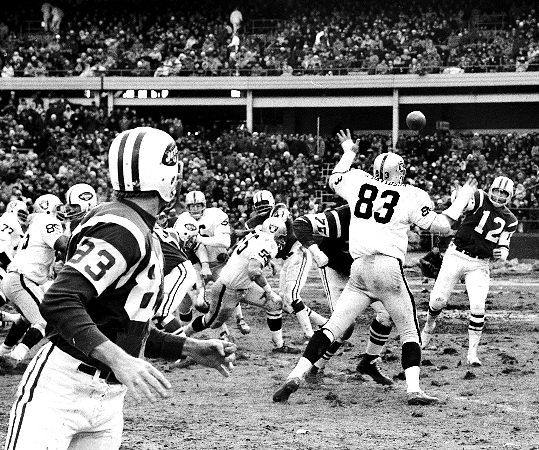 It was fifty years ago today- Sunday December 29, 1968 the Oakland Raiders went to Shea Stadium in New York to face the NY Jets with a trip to Super Bowl III going to the winner. The Jets jumped out to a 10-0 lead by the end of the first quarter- with Joe Willie Namath starting the scoring on a touchdown pass to Don Maynard of 14 yards. Namath and Maynard would hook up twice for touchdowns-the game winner in the 4th quarter was a 6 yard pass to Maynard half way through the 4th quarter. Namath didn’t have his greatest  game but he did have three touchdown passes on the day- as the Jets beat the Raiders 27-23 and would go to Super Bowl III heavy underdogs to the NFL Champion Baltimore Colts.  It was thought at the time by many that the upstart AFL was at least a decade away from being competitive with the established NFL. The Super Bowl would be held at the Orange Bowl in Miami on January 12th.