It was fifty years ago today- Tuesday November 5th- Election Day in the United States. The Republican nominee for President Richard Milhous Nixon was elected President of the United States. Nixon who had a huge lead nearly evaporate by election day- he was always a horrible campaigner- won 43. 4 % of the vote, the Democratic nominee Vice President Hubert Horatio Humphrey 42.7% and Independent candidate George C. Wallace came in with 13.5%. In vote totals Nixon beat Humphrey by over 500,000 votes across the entire country 31,783,783 to 31, 271,839, Wallace was a distant third with 9,901, 118. Where it really matters of course in American Presidential Elections is the Electoral College- here Milhous Nixon distanced himself from the other two- he needed 270 to win- and carried 32 of the 50 states winning 301 electoral college votes. Humphrey won 13 states plus the District of Columbia for 191 electoral college votes and Wallace, from Alabama won 5 states in the deep south and collected 46 electoral college votes. Wallace’s hope was to win enough electoral college votes to deny Nixon or Humphrey the 270 needed- which would have thrown the election into the House of Representatives and make him a power broker in determining who was elected but he came up short of doing that. Had Humphrey picked up a couple other big states that could have worked also in denying Nixon 270- looking at the map- Illinois for example went to Nixon- in 7 of the previous elections the democratic candidate had won Illinois -in 1968 Illinois had 26 electoral votes- not enough to deny Nixon but if Illinois and Wisconsin- both won by Nixon by 3% of the vote had gone Humphrey we would have woke up November 5th with no president-elect.  But none of those things happened and Nixon for good or ill had made one of the greatest political comebacks in American history. Left for dead politically in the early 1960’s after losing to John F. Kennedy in the 1960 election and humiliated when he ran for Governor of California in 1962 by Pat Brown- {in the press conference the next day he declared ‘you won’t have Nixon to kick around any more , because gentleman, this is my last press conference.” He didn’t keep his word and on January 20, 1969 he would become the 37th President of the United States.

Nixon who was elected with a minority of the vote would go into his presidency with a Democratic US Senate and House of Representatives. In the US Senate the Republicans did pick up 5 seats but would be outnumbered in January 58 to 42. In the House where 435 seats were up- the Republicans gained a total of 5 seats here too- the total now being 243 for the Democrats and 192 for the Republicans.

There has always been speculation over the years- Humphrey was coming on late- if the election had been held a week later come maintain Humphrey may have won. The fact is though it wasn’t held a week later and we will never know. Nixon was able to hold on. Nixon wouldn’t debate Humphrey- and in 1972 wouldn’t debate the hapless George McGovern- it should be noted Nixon was the last incumbent to not agree to presidential debates- starting in 1976 there have been presidential debates every election cycle. 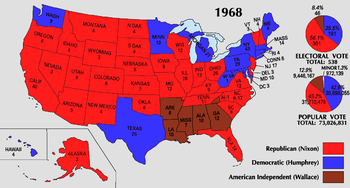 4 responses to “IT WAS FIFTY YEARS AGO TODAY–NOVEMBER 5, 1968 –RICHARD MILHOUS NIXON ELECTED PRESIDENT OF THE UNITED STATES”