It was fifty years ago today- August 22, 1968-Chicago Mayor Richard “Dick”  Daley opened the Democratic National Convention  at the International Amphitheater in Chicago, Illinois and all hell was about to break loose.

The incumbent President Lyndon Baines Johnson was not seeking re-election so the big issue at the convention would be to pick the Democratic Presidential candidate to run against the Republican Richard Milhous Nixon. Senator Robert F. Kennedy had been assassinated in June and Sen. Eugene McCarthy of Minnesota who was his big rival in the primaries for the anti-war/ youth vote seemed after the assassination to lose his drive. The sitting Vice President Hubert H. Humphrey had entered the race but didn’t complete in any of the primaries. Going into the convention it certainly appeared that LBJ who while he wasn’t running still held command of the party would have his boy Hubert nominated. Humphrey at this time hadn’t broken from LBJ and the Vietnam War.

Thousands of young anti-war demonstrators descended on Chicago that week and their plan was to disrupt the convention. Leaders of the Yippies were the colorful Abbie Hoffman and Jerry Rubin. There had been riots earlier in the year in Chicago and the Mayor Richard Daley felt the police had been too easy on the rioters and he vowed that this wouldn’t happen again.  Thousands of protesters marched peacefully through the South Loop and Grant Park. At Lincoln Park where the Yippies were holding a Festival of Life the police used tear gas to clear out the protesters at 11pm. Inside at the convention it wasn’t much better- the delegates who were split on a number of issues centering on the war- argued well into the night.

The Democratic National Convention was off to a rocky start and things would get much much worse before it was all over. 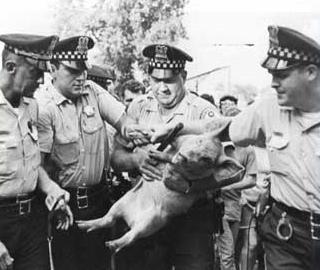