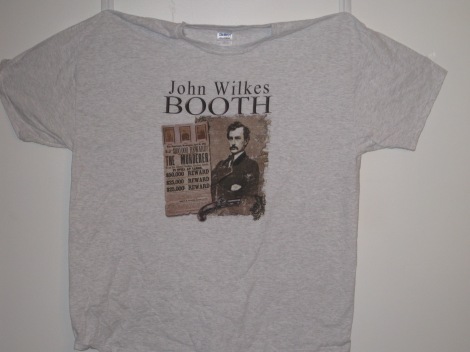 Over the years I have been a collector of t-shirts. I need to get them all out and sort them and count them but I have hundreds of them. On vacations I would pick them up, I order them online, go on a little trip and I see a t-shirt I like I would pick it up. It’s not like I set out to have some kind of collection, it has just kind of happened over the years. I am going to write about my collection and the memories they bring back.

I am starting off with an odd one.- a t-shirt of President Lincoln’s assassin John Wilkes Booth. I picked this one up several summers ago in downtown Gettysburg. I have always been interested in both President Lincoln and President Kennedy’s assassinations. I’ve read a great deal about them, have watched countless documentaries, I’ve been to Ford’s Theater a couple dozen times and to Dealey Plaza in Dallas for times.

When I wear the John Wilkes Booth t-shirt it usually draws some looks and remarks. Never any hostility though. There has always seemed to be a difference between the two most notorious assassins in American history. I don’t think a t-shirt of Lee Harvey Oswald would go over too well. Is it became that assassination was still in our national memory and Lincoln’s is 152 years ago? I think that is part of it but also the assassins themselves. Lee Harvey Oswald was in one word- a loser. He had little going for him, few if any friends. There is nothing redeemable about Lee Harvey Oswald. If you were around back then before the assassination and knew Lee Oswald chances are you wouldn’t have thought much of him. Johnny Booth on the other hand- before the assassination, if you knew him you’d no doubt like him. Johnny was a popular guy. A famous actor of his day from the most famous acting family. He was a charming man. very charismatic. People did like him. Is that a big reason why he comes across better in history than Oswald? For some reason he seems to get a better press. Booth seems more acceptable. Is another reason because Booth had a motive however wrong the motive was whereas Oswald as far as we know really had none? I’ve never read anything where Oswald hated JFK with a passion. JFK it seems went to the wrong city. He was in Oswald’s path. I don’t think Lee Oswald was going to travel across the country to assassinate JFK.  The store in Gettysburg was selling the John Wilkes Booth t-shirt. I can’t imagine a store selling a Lee Oswald t-shirt in Dallas or anywhere.

The Booth- Oswald comparison reminds me of another one- Nazi Germany and the U.S.S.R.  To walk down the street with a t-shirt of Hitler or a swastika on it- would be a no-no {No I don’t own such a shirt nor would I buy one} but I have seen people wearing t-shirts with the Hammer and Sickle and no one gets a bit bent out of shape. Why is that?