The 1924 Paris Olympics were the last to be organized under the leadership of Pierre de Coubertin the father of the modern Olympic Games. This would be the second games hosted by Paris. The games would be held from May 4 to July 27th.

The 1924 Paris games were very well attented and the competition level was high. The games were considered a success but there were was the distrubing upsportsmanlike behavior of the French. They would boo when the National Anthem of other countries were played and there was a lot of bitterness towards Team USA which ran away and hid with their success at these games. The final medal count was not even close. The United States won 45 gold with a total medal count of 99, Finland was second with 14 gold and 37 total. In third the host country France with 13 gold and 38 total, 4th was Germany with 9 gold and 34 total and coming in 5th was Italy with 9 gold and 18 total medals.

In the track and field events the story of the 1924 Paris Games was the Flying Finns led by Paavo Nurmi, they would dominate the distance events, Great Britain and the United States would win the shorter distance races. The great Nurmi would win gold in the 1500 meters and the 5000 meters. Get this, he won both events with only an hour to rest between the end of one and the start of the other. Who did the scheduling here? It would be like running the 100 and 200 meters and hour apart. 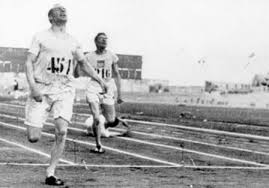 American swimmer and future Tarzan-Johnny Weissmuller would win 3 gold medals in swimming and a bronze medal in water polo. In the swimming events this would be the first time they would use the 50 meter standardized pool with  marked lanes.

One response to “1924 Paris Olympics -The VIII Olympiad”