The great running back from the Chicago Bears -Walter Payton born on this day in 1954. Sadly he died at the age of 45 back in 1999 of a rare liver disease.  i rank JimBrown and Barry Sanders as #1 and #2 on the greatest running backs of all time list. I think Payton would probably be #3.

When he retired he was the all-time leading rusher with 16,726 yards. He was passed in yardage by Emmitt Smith. Payton was a 9 time pro-bowler. Its easy to forget that for a good part of his career he played on lousy Chicago Bear football teams. Later in his career the Bears finally got their act together and one of the all-time great players got to play in the Super Bowl. It was too bad that Mike Ditka’s ego got in the way- and Walter didn’t score a touchdown in the Super Bowl. Giving the ball to Refrigerator Perry and letting him score was just a showoff move by Ditka to get attention. Those Bear teams only went to one Super Bowl- that team should have won 2 or 3 Super Bowls. The fact they didn’t wasn’t the fault of Walter Payton.

Walter had a brother Eddie who also played in the NFL who was a journeyman player for 5 years in the league. Eddie was mainly used as a kick and punt returner.

After scoring touchdowns Walter was not one to celebrate, he’d usually just hand the ball to the official. He was a hard running back who seemed to deliver as much punishment to the tackler as he received. I can still see him hitting and bouncing off of tacklers and going on for more yardage. He was great at stiff-arming tacklers. He was not a running back who was going to run out of bounds to avoid contact.  Great athlete. Hard working athlete. Truly one of the all time greats. There is no one in the league today who is even close to him. It was fun to watch him play the game. 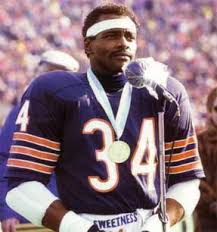