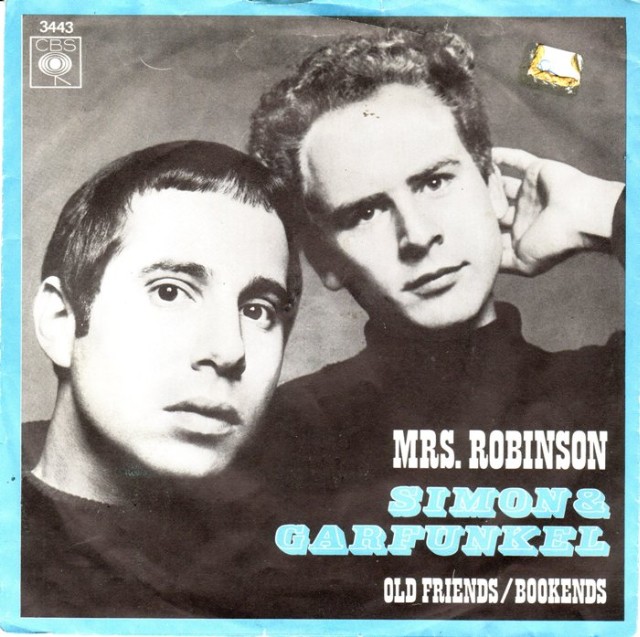 This song was written for the movie “The Graduate.” Originally it was a song Paul Simon was working on called “Mrs. Roosevelt”-  in which Paul was writing a song about how Eleanor Roosevelt would look at a world without heroes. Artie Garfunkel pointed out that Roosevelt and Robinson had the same amount of syllables- so Paul went to work on the song. I have seen the movie a number of times over the years- and its a great movie- and obviously I think of this as a great song but the song and the movie really doesn’t go together. My favorite line -being a huge baseball fan is- “Where have you gone Joe DiMaggio”  Joe reportedly didn’t get it.  Actually Paul- a big baseball and Yankees fan was more of a Mickey Mantle fan. When asked by Dick Cavett why he didn’t mention Mantle instead of DiMaggio- Paul said ‘It’s about the syllables, Dick, it’s about how many beats there are. ” After Joe DiMaggio’s passing- at a tribute day to DiMaggio at Yankees Stadium- Simon performed “Mrs. Robinson.”

In a New York Times op-ed in March 1999, shortly after DiMaggio’s death, Simon discussed this meeting and explained that the line was meant as a sincere tribute to DiMaggio’s unpretentious and modest heroic stature, in a time when popular culture magnifies and distorts how we perceive our heroes. He further reflected: “In these days of Presidential transgressions and apologies and prime-time interviews about private sexual matters, we grieve for Joe DiMaggio and mourn the loss of his grace and dignity, his fierce sense of privacy, his fidelity to the memory of his wife and the power of his silence”

I also love Paul’s homage to The Beatles “coo-coo-ca-choo.’