Remembrance Of Things Past- Ten Cent Beer Night In Cleveland- Tuesday June 4, 1974. I was thirteen years old in the summer of 1974- and a stone cold baseball fanatic. I lived 45 minutes from Pittsburgh so I was a Pirate fan but if the Pirates weren’t playing I’d listen to whatever games I could get on the radio and I often listened to the Cleveland Indians- who may have been the most pathetic franchise in baseball in the 1970’s.  Cleveland was a couple hours away and I adopted them as my American League team. On this night the Pirates were playing on the west coast in Los Angeles so I was listening to the Indians on this evening.

Ten Cent Beer Night had to be the worst / stupidest promotion ever. What were they thinking? To add fuel to the fire they were playing the Texas Rangers that night. The Rangers manager was the brilliant manager but notorious drunk Billy Martin. Not a good idea. There was no limits on the beer so every drinker in Cleveland must have turned out. They drew over 25,000 that night. There were troubles though out the game with fans but all hell broke loose in the 9th inning.  Descriptions from wikipedia- and a story attached below. ….. The really incredible thing is after this happened- six weeks later Cleveland had ANOTHER Ten Cent Beer Night- this time they limited people to two beers each. Another note on baseball in the 70’s compared to today. Going to ballgames in the 1970’s could be an experience. There was a lot of drinking in the stands, depending on who the visiting team was there would be fights. When you heard crowd noise for no reason you started looking around to see where the fight was. It happened quite regularly. Baseball cleaned up its act after that decade. I can’t remember the last game I attended where a fight broke out. That is all for the good. 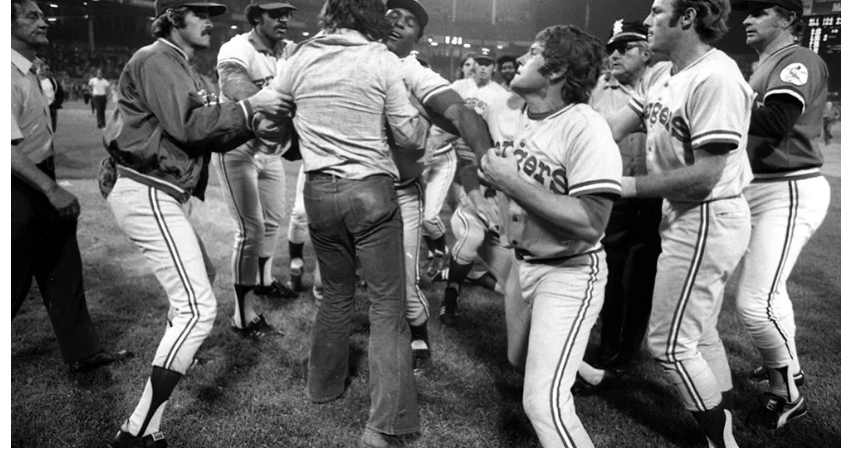 The idea behind the promotion was to attract more fans to the game by offering 12 fluid ounce (355 ml) cups of 3.2% beer for just 10 cents each, a substantial discount on the regular price of 65 cents, with a limit of six beers per purchase but with no limit on the number of purchases made during the game. During the game, fans became heavily intoxicated, culminating in a riot in the ninth inning which caused the game to be forfeited due to the crowd’s uncontrollable rowdiness and because the game could not be resumed in a timely manner.

After the game, a Cleveland reporter asked Rangers manager Billy Martin “Are you going to take your armor to Cleveland?” to which Martin replied, “Naw, they won’t have enough fans there to worry about.” During the week leading up to the teams’ next meeting in Cleveland, sports radio talk show host Pete Franklin and Indians radio announcer Joe Tait made comments that fueled the fans’ animosity toward the Rangers. In addition, The Plain Dealer printed a cartoon the day of the game showing Chief Wahoo holding a pair of boxing gloves with the caption, “Be ready for anything.”