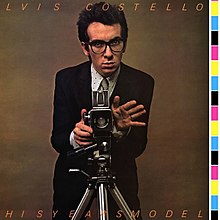 One day at school in the early of 1978 a school friend of mine Ryker came into class and started raving about this new artist he’d heard- Elvis Costello. Ryker and I liked similar music so I trusted his judgement. Of course the name Elvis Costello wasn’t one I had to write down- how can you forget that name. Ryker also said this Elvis guy looked like Buddy Holly if Buddy had stuck his finger in a light socket. So that evening my brother and I went to the mall and they had both albums. Bought the albums and came home and played them over and over and over. Probably the albums outside of Beatles albums that are my most players were those Elvis albums. The first seven EC albums I played to death. These albums were a big influence in my riding the New Wave. I would soon read comparisons of Elvis to another artist- Graham Parker and then Joe Jackson- so I had to get the albums they had and it just went from there.