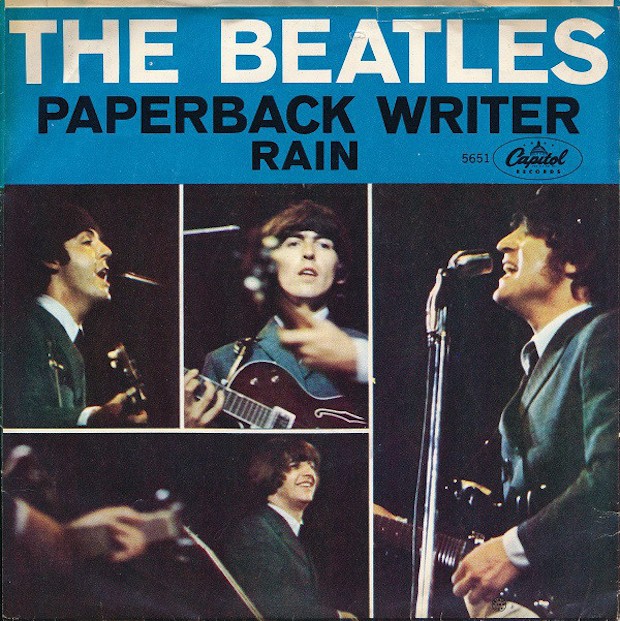 Late in 1966 The Rolling Stones with “Get Off Of My Cloud” knocked The Beatles “Yesterday” out of the #1 spot- now in the summer of 1966 The Beatles return the favor with “Paperback Writer” replacing The Rolling Stones “Paint It Black” at #1. The song was written by Paul McCartney. This is one of my favorite Beatles singles- my favorite is the Double A single which would come in 1967- “Penny Lane”/”Strawberry Fields Forever”- in my opinion the greatest single ever by anyone. “Paperback Writer” backed by “Rain” would certainly be a top contender as my second favorite Beatles 45.  Paul has said that “Paperback Writer” came from a challenge his Aunt Lil put to him to write a song that wasn’t about love. The idea’s a bit different. Years ago, my Auntie Lil said to me, ‘Why do you always write songs about love all the time? Can’t you ever write about a horse or the summit conference or something interesting?’ So, I thought, ‘All right, Auntie Lil.’ And recently, we’ve not been writing all our songs about love.” John Lennon in later interviews said it was mainly Paul’s song and that he may have helped a little on the lyrics- and called it ” Son of “Day Tripper” but Paul’s song. “Paperback Writer” is one of my favorite Beatles songs written by Paul. I love “Rain” the b-side even more.