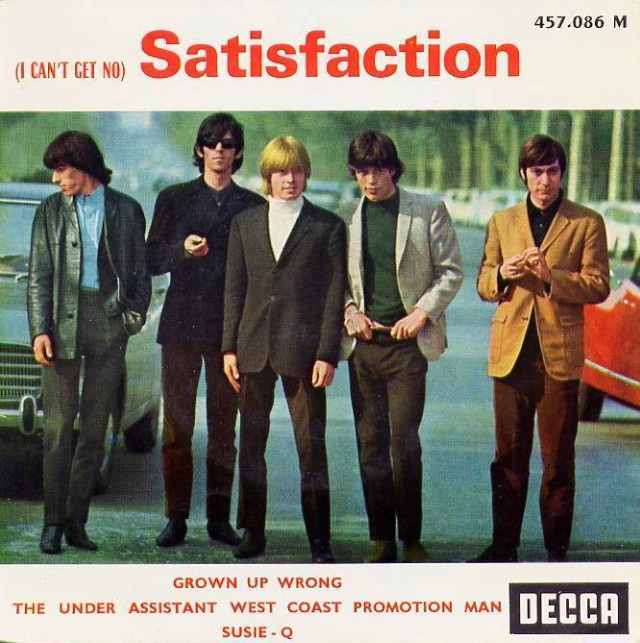 1965- a year of iconic #1 hit singles continues with perhaps the greatest one of all- “Satisfaction.” It was early July only half way through the year and already we’d had such #1 hits as “You’ve Lost That Lovin’ Feelin'”, “My Girl”, “Eight Days A Week”, “Ticket To Ride”,”Mr. Tambourine Man”- among others and there are still many more to go. I would nominate Keith Richards guitar riff which opens the song as the most iconic riff in rock and roll history. Originally the guitar riff was going to be replaced by horns. Originally in the UK the song was only played on pirate radio stations due it the sexually suggestive lyrics. Rolling Stone Magazine ranked “Satisfaction” at #2 in their 500 Greatest Songs Ever list. It’s hard for me to argue against that judgment. Their #1 song by the way was “Like A Rolling Stone”- Bob Dylan. Newsweek has called it “five notes that shook the world.”

Keith Richards has famously claimed that he wrote “Satisfaction” in his sleep. He had  the habit of keeping a cassette recorder by his best in case he work up with something and he woke up and put the riff on his cassette player and went back to sleep. That was a productive night of sleep. Wait- Keith Richards sleeps?

Mick Jagger on “Satisfaction: “It was the song that really made the Rolling Stones, changed us from just another band into a huge, monster band … It has a very catchy title. It has a very catchy guitar riff. It has a great guitar sound, which was original at that time. And it captures a spirit of the times, which is very important in those kinds of songs … Which was alienation.”