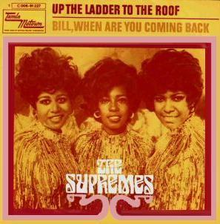 Diana Ross had left The Supremes but for a while they were still putting out hits without her- without Miss Ross from 1970-76 they had 14 Hot 100 singles with 8 of those making the Top 40. As the distance from the Diana Ross era increased The Supremes success decreased. With “Up The Ladder To The Roof”- replacing Miss Ross as lead singer was Jean Terrell sister of former heavyweight contender Ernie Terrell and former sister-in-law of Tammi.