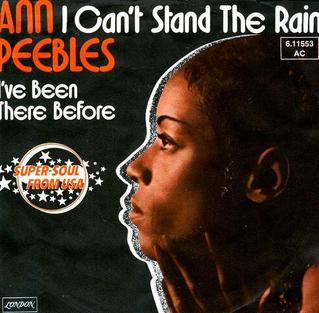 “I Can’t Stand The Rain” was recorded first by Ann Peebles in 1973 and was on her album titled “I Can’t Stand The Rain.” It peaked at #38 on the Billboard Hot 100- which kind of surprised me I thought it was a bigger hit than that. The song was written by Ann Peebles, Don Bryant and Bernie Miller- Peebles would later marry Bryant and Miller was a DJ. The song would later be hits by Eruption #18 in 1978 and it was a hit by Tina Turner in Europe in 1985. There have been a couple dozen covers of this song. It was the only Top 40 hit in Peebles career but a memorable one.

From Wikipedia- the story of how the song was written-

One evening in Memphis in 1973, soul singer Ann Peebles was meeting friends, including her partner, Hi Records staff writer Don Bryant, to go to a concert. Just as they were about to set off, the heavens opened and Peebles snapped: “I can’t stand the rain.” As a professional songwriter in constant need of new material, Bryant was used to plucking resonant phrases out of the air and he liked the idea of reacting against recent R&B hits that celebrated bad weather, such as the Dramatics‘ “In the Rain” and Love Unlimited‘s “Walkin’ in the Rain with the One I Love“. So he sat down at the piano and started riffing on the theme, weaving in ideas from Peebles and local DJ Bernie Miller. The song was finished that night and presented the next morning to Hi’s studio maestro, Willie Mitchell, who used a brand new gadget, the electric timbale, to create the song’s distinctive raindrop riff. It really was that easy. “We didn’t go to the concert,” Bryant remembers. “We forgot about the concert.”

John Lennon was a big fan of the song- he commented once in an interview with Billboard Magazine- “It’s the best song ever.”