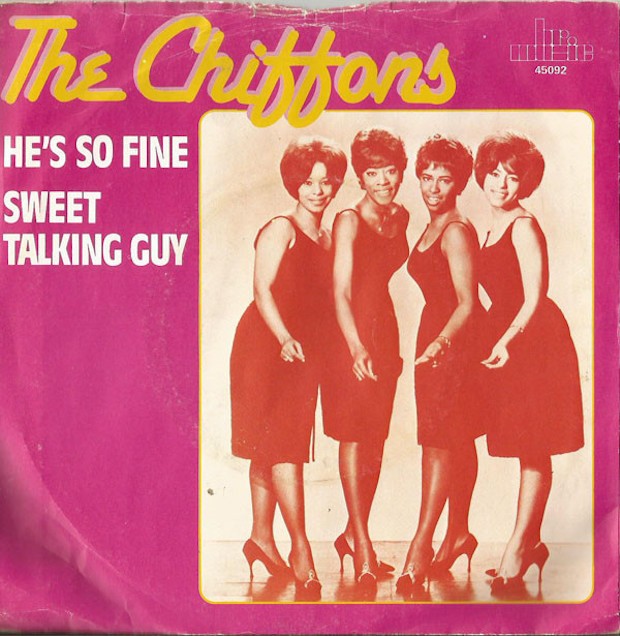 This song may be most famous now for the 1971 lawsuit by the Bright Tunes Music Corporation against ex- Beatle George Harrison for allegedly nicking the melody for his #1 hit “My Sweet Lord.” The trial didn’t occur until 1976 when Harrison was found guilty of subconsciously plagiarizing “He’s So Fine.” In an odd turn the penalty wasn’t determined until 1981 and it was that Harrison had to pay $587,000 to buy Bright Tunes. By that time who owned Bright Tunes? Former Beatles manager- the scoundrel Allen B. Klein. On George’s 1976 album 33 1/3- he responded to the lawsuit with the hit single “This Song.”

A sad story around “He’s So Fine.” It was written by a young songwriter who knew The Chiffons- Ronnie Mack. Shortly after the song was recorded by The Chiffons- Mack died at the age of 23 . Mack had heard three Bronx high school girls singing- he suggested they add Sylvia Peterson a Philadelphia singer to the group- and he named them The Chiffons. “He’s So Fine”- was originally written about Peterson -“She’s So Fine”- of course for The Chiffons the gender in the song was flipped. The Tokens and Carole King played on this song. Mack had a hard time finding a record company to release it- until a small label Laurie agreed to. The song was at #1 when Mack died of Hodgkin’s lymphoma.