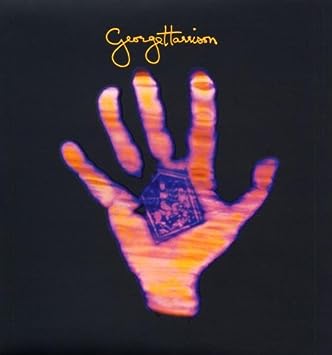 The Beatles Top 60 Solo Songs- #58- “Living In The Material World.” The title track from George Harrison’s second solo album after the demise of The Beatles. The album was released in the spring of 1973- 2 1/2 years after his greatest album [and possibly the best ex- Beatles album- if I were to do such a countdown}- All Things Must Pass.

Since becoming a Beatles fanatic in the fall of 1976 I have spent a lot of time listening to The Beatles and just as much time reading and thinking about them. John and Paul have from the beginning of The Beatles -John and Paul have gotten the top billing- and deservedly so. Of all the factors that added up to make The Beatles what they were the #1 factor has to be the songs written by John and Paul. George was the youngest and a late bloomer. As a songwriter he didn’t start to come into his own until the last few years of the group. John and Paul always looked at George as a junior member.When it came to working on the songs- John and Paul would make sure that their songs got more time spent on them that George did his. When George did get better with the songwriting they were defensive of their territory.  George understandably had some bitterness then and later about the whole thing.

George always had the tag of the quiet Beatle, the serious Beatle and the spiritual Beatle. In thinking about the individual Beatles he may have also been the most interesting because he was so hard to figure. George had just turned 27 when The Beatles officially broke up. He was 30 when this album came out. The song “Living In A Material World”  and in many ways most of the album show George struggling with how to balance his spirituality with being a rich rock superstar. He was a man of contradictions -[aren’t we all}

When I became a Beatles fan and got to the point where I started buying the solo albums- I would read reviews of George albums and especially from the mid 70’s on- the reviews would focus on what they would describe as preachy songs and it was clear it wasn’t meant to be a compliment. As teenager I wasn’t impressed with some of those type songs either to me they seemed long and kind of boring. Now over 40 years later I hear those songs and albums a lot differently- they sound a lot better to me now. I also now view a lot of George’s albums as George being an artist- and doing what he wanted. There is something to be admired about that approach. How many rock musicians can you say that about? Van Morrison, Bob Dylan and Joni Mitchell come immediately to mind . There are others.

“Living In A Material World” the final song on side 1 of the album- was never released as a single- but I think it had hit single potential.  The album while not up to the high standard that All Things Must Pass set- is a very good album. It went to #1 on the album chart and had a #1 single in “Give Me Love {Give Me Peace On Earth.} The album features outstanding rock musicianship and a blending of rock sounds with the eastern sounds that George loved.  George would donate the copyright to “Living In The Material World” and eight other tracks on the album to the Material World Charitable Foundation- a foundation he set up to help encourage the exploration of alternative life views and philosophies.

Martin Scorsese’s 2011 documentary on George – which is well worth watching- is titled George Harrison- Living In The Material World.