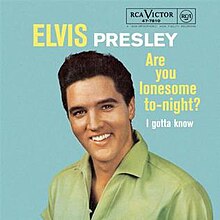 The 19th and final #1 Billboard hit in 1960- Elvis had three #1 hits in the year with “Stuck On You”, “It’s Now Or Never” and this one which stayed on top into the first week of 1961. “Are You Lonesome Tonight” was an old song by the time Elvis recorded it- having been written back in 1926. It was originally a hit by Charles Hart. Elvis out of the U.S. Army in 1960- recorded it at the suggestion of his manager Col. Thomas Parker- it was Parker’s wife Marie’s favorite song. RCA Victor held back on releasing the single because they didn’t feel it went well with Elvis’s new style. When it was released it proved to be a big smash- going to #1 not only on the US Billboard Singles chart but on the UK Singles Chart also. It was Elvis’s 15th US Billboard #1 hit.