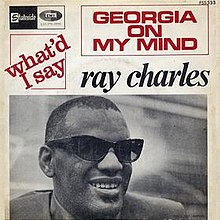 Written by the great Hoagy Carmichael and Stuart Gorrell in 1930- Carmichael wrote the song about his sister Georgia. The song was first recorded by Carmichael and Orchestra in the year it was written. The song is most associated with Ray Charles. In Rolling Stone Magazine’s special on the Greatest Songs Of All Time- Ray’s version came in at #43 out of 500. Ray Charles was from Georgia. He recorded it because his driver suggested he do so-since he kept singing it in the car. Ray Charles won Grammy’s for Best Male Vocal Performance and Best Pop Song Performance. It was the first Billboard Pop #1 hit for Brother Ray.  “Georgia On My Mind” became the state song of Georgia in 1979. Willie Nelson covered it and took it to #1 on the Country Music Singles chart in 1978. Willie sang it at Ray’s funeral in 2004.