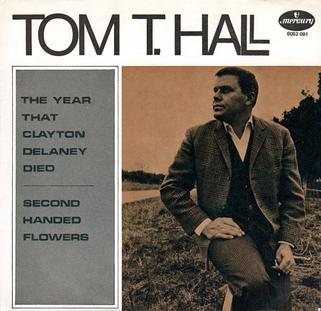 Three Chords and The Truth: Essential Country Music Songs:”The Year That Clayton Delaney Died.” The first song I remember hearing by Tom T. Hall- was this one “The Year That Clayton Delaney Died”- his second #1 hit- which came out in the summer of 1971. It wouldn’t be until the late 70’s when I had gotten into music and was buying up albums when I got more acquainted with Hall- the Kentuckian known as “The Storyteller.”

“The Year That Clayton Delaney Died” is the story of Tom T. Hall’s childhood neighbor and boyhood hero- a man named Lonnie Easterly. The single as mentioned before went to #1 on the country singles chart- and even made a dent in the Hot 100 Pop chart- peaking just outside the Top 40 at #42.

Here is what Tom T. Hall had to say in an interview by CMT about “The Year That Clayton Delaney Died.”

Was the character in “The Year That Clayton Delaney Died” based on someone named Floyd Carter? I’ve read varying accounts on that.

No, his name was Lonnie Easterly. I used to travel and look for songs. That was my alias, Floyd Carter. If I was out looking for songs and they’d say, “Aren’t you Tom T. Hall?” I’d say, “No, I’m Floyd Carter.” I never told many people that. I didn’t have to use it a lot. I’d get in my car and drive through small town America and stop off at little cafes and pool halls, to look and listen. I got a lot of songs that way. There toward the end, it got to where people would recognize me.

But Lonnie Easterly was his name. The way I got the name Clayton Delaney, it’s a good story. The hill he lived on was called Clayton Hill, and the people who lived next door to him were the Delaneys. So I didn’t want to move too much geography around and lose the feel of what I was writing about. So when I changed his name, I changed it to a hill and a neighbor. I kept everything on that hill, there in his neighborhood, to keep from losing that reality.