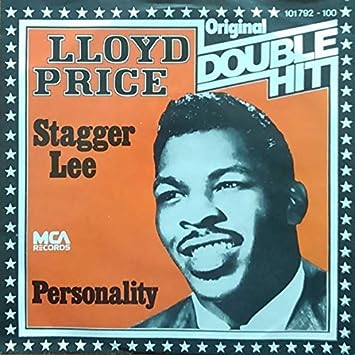 “Stagger Lee”- by Lloyd Price was the second new #1 hit on the Billboard chart in 1959- it went to #7 on the UK singles chart. “Stagger Lee” was an old folk song.  It goes back to the 1895 Christmas murder by Billy Lions of Lee Shelton in St. Louis. The song was published in 1911- the first recording of it would come a decade later by Fred Waring’s Pennsylvanians. Over the years there have been countless versions of the song- the biggest and most celebrated being by Lloyd Price. Others who have covered in many variations. Even the lame Pat Boone did a cover. “Stagger Lee” would be the only #1 hit Price had on the Billboard Hot 100. Rolling Stone listed “Stagger Lee” by Lloyd Price at #456 on their 500 Greatest  Songs Of All Time list. He had 3 Top 10 hits- “Personality” #2 and “I’m Gonna Get Married” #3 both in 1959. Lloyd Price is still living- 86 years old.

below is a brief history of Stagger Lee and Billy.

A Brief History of Stagger Lee and Billy Lyons