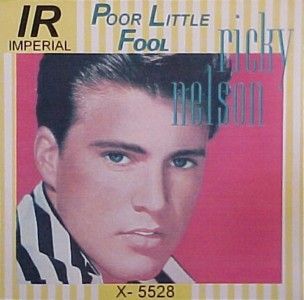 “Poor Little Fool”- Ricky Nelson. #1 for two weeks beginning on August 4, 1958. Released on the Imperial label. Written by Sharon Sheeley. Genre: Rock and Roll.  Time:2:32. B:Side: “Don’t Leave Me This Way.” Album: Ricky Nelson [his second album}  Grade: A.  Sharon Sheeley was only fifteen years old when she wrote this song. She had met The King- Elvis Presley and he encouraged her to write. She wanted Ricky Nelson to record this song- how did she get his attention? She drove to his house, claimed that her car was broken down and when he came to her aid she showed him the song. Her original was faster then the slowed down version that he recorded and took to #1.  Playing guitar on this single was Ricky Nelson’s secret weapon- one of the greatest guitarist in rock and roll history- James Burton- who regularly backed up Nelson. Elvis’s back up singers The Jordanaires appear on the single but were not given credit- because of their association with Elvis.  “Poor Little Fool” did well on other charts also- #3 on both the US Country and Rhythm and Blues chart. In the UK it went to #4 on the UK Singles Chart.

Sharon Sheeley was eighteen years old when he song hit #1-she was at the time the youngest woman to write an American #1 hit. She would go on to write songs for Eddie Cochran who she was engaged to. She co-wrote one of Cochran’s most famous songs “Somethin’ Else” with Eddie’s brother Bob.  While traveling with Cochran and Gene Vincent in England on the night of April 16. 1960 traveling in a taxi from Bristol to London Airport- the car blew a tire and hit a lamp post- Eddie Cochran would die the next day from his injuries at the age of 21. Sheeley had a broken pelvis and Vincent broke ribs and his collarbone and further damaged an already bad leg.  A year later Sheeley married an LA DJ named Jimmy O’Neill and they created the ABC-TV series Shindig! which was on television from 1964-66. Sharon Sheeley died at the age of 62 in 2002 of a cerebral hemorrhage.