HANK WILLIAMS: THE ORIGINAL SINGLES COLLECTION: 1990: 3 DISCS: COUNTRY: GRADE : A++: CD: 3 discs 84 songs from The Hillbilly Shakespeare- Hank Williams. Hank recording career was short- 1947-52- he died on New Years Day 1953 at the age of 29.  He has been dead closing on 70 years but remains the most legendary and important figure in the history of country music and on the short list of greatest and most important musical figures in the history of American music [I will go with Louis Armstrong at #1 but Hank has to be Top 5 at least.} Hank influenced not only country music- but artists like Chuck Berry, Bob Dylan, Elvis, The Rolling Stones and on and on. He may even be considered the first punk rocker.  There is no way I could make a list of Hank’s best songs- the list would go on and on. In 2010 the Pulitzer Prize jury awarded awarded Hank a posthumous special citation for his craftsmanship as a songwriter who expressed universal feelings with poignant simplicity and played a pivotal role in transforming country music into a major musical and cultural force in American life.

This 3 cd set contains most of his great songs- but I do have the massive ten disc 225 song- The Complete Hank Williams that came out in the late 90’s [it isn’t complete and some of the recordings aren’t essential } I will be listening to the box a disc at a time in the next month.  My favorite Hank songs- I will go with two- ‘I Saw The Light” and ‘I’m So Lonesome I Could Cry.” 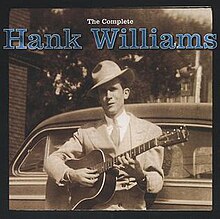