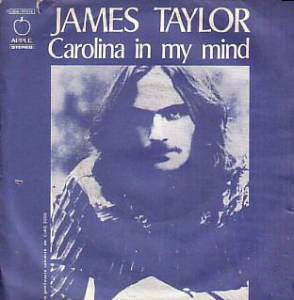 This Must Be The Place: “Carolina In My Mind” -James Taylor. One of my favorite songs by James Taylor- up there with “Fire and Rain.” Although born in Massachusetts- the Taylor’s moved to the Chapel Hill area of North Carolina when he was young- he would say of his experiences growing up in North Carolina- “Chapel Hill, the Piedmont, the outlying hills, were tranquil, rural, beautiful, but quiet. Thinking of the red soil, the seasons, the way things smelled down there, I feel as though my experience of coming of age there was more a matter of landscape and climate than people.” It has been a few years since I’ve been to North Carolina but there is some beautiful country down there. I have a friend who lived down there years ago and all she talks about is someday moving back.

James Taylor wrote this song while in England in the late 60’s- where he signed with The Beatles Apple label. The song appeared on his debut album. The song reflects the homesickness he was feeling at the time. The version below was a re-recorded version made for his Greatest Hits in the mid 70’s- it I believe is superior to the original version.

11 responses to “THIS MUST BE THE PLACE: “CAROLINA IN MY MIND”- JAMES TAYLOR”