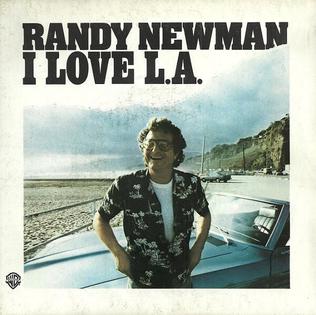 This Must Be The Place- Randy Newman “I Love LA.” There are so many great songs out there about different cities and states- thought I’d start a new feature with with some of those songs. The other day I was listening to Randy Newman’s 1983 album “Trouble In Paradise” and heard this song for the first time in a while. The song has an interesting history- after his Born Again album in 1979- Newman who is an LA native and music is the family business- he had three uncles who were film score composers- Alfred, Lionel and Emil Newman. I don’t know how many old movies I’ve watched over the years and when the credits ran at the end you’d see one of those names… anyway- back to the story. Newman after the Born Again album was taking it easy for the next four years. He decides to go into the studio and record a song he was working on called “Something To Sing About”- which the narrator arrogantly boasts about the suburban opulence around him. The song wasn’t released because his friend/ producer Lenny Waronker didn’t like it.  Not long after that- Newman was on a plane and had a conversation with Don Henley of The Eagles. {I Hate The F’n Eagles} Henley told Randy that he could no longer afford to charter a Leerjet anymore. Randy sarcastically replied “Jesus that’s tough…you can’t live on a million a year anymore” During the conversation Henley suggested that Newman should write a song about Los Angeles- since he was a native of the city. With “Something To Sing About” still on his mind- he took that feeling into writing “I Love LA”-  Newman has always been noted for his sardonic lyrics- and in this song he hints at times of the darker side of Los Angeles. It is also an odd song in the Newman catalog- it is an energetic fast moving song. Great video too. I’ve been to Los Angeles a few times over the years. A nice place to visit but I wouldn’t want to live there. Of course I’d say that about every city.

6 responses to “THIS MUST BE THE PLACE: “I LOVE LA” RANDY NEWMAN”