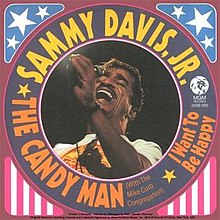 The Sounds of Summer- Day 64 of 95. “The Candy Man”- Sammy Davis Jr. Another one of those songs which isn’t necessarily a song about summer but one which I associate with a summer. During the summer of 1972 this single went to #1. I wasn’t much of a music fan back then- I was eleven and more interested in baseball than music but I clearly remember hearing this song it seemed like every time a radio was on at home or in the car. A few years later when my Pirates had pitcher John Candelaria on the team- he was nicknamed The Candy Man- and the song was a regular fixture at Pirate games- so I guess it does have a summer connection.