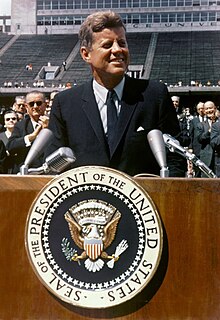 In JFK’s speech at Rice University on September 12, 1962 he proposed that the United States would send a man to the Moon before the decade was out and return him safely to Earth. JFK wouldn’t live to see it happen but NASA was about to meet the goal he had set. On the morning of July 16, 1969 Apollo 11 would launch- the mission to the Moon.

One response to “PRESIDENT KENNEDY’S RICE UNIVERSITY SPEECH ‘ WE CHOOSE TO GO TO THE MOON”-SEPTEMBER 12, 1962”