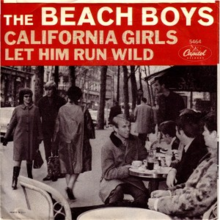 Summer begins at 11:54 AM EST today. I must admit I am not a big fan of summer especially summer weather. I don’t like hot and humid weather and being fair skinned I try to avoid the sun. I am more of a fall-winter-spring person. The summer here in Ohio is starting out as I wish the entire summer would be- high of 73, sunny and not humid- again not a fan of the sunny part but as long as it doesn’t get more than around 70 degrees I am good .  There are a lot of great summer songs out there more than enough to fill the 95 days until Autumn.  When I think of summer songs I think first of The Beach Boys- I have to start the summer with a Beach Boys song. “California Girls” was written by Brian Wilson and Mike Love and appeared on The Beach Boys Summer Days [And Summer Nights!!} album in 1965. The lead vocalist on “California Girls” is Mike Love. The single was released in the middle of July 1965 and peaked at #3 on the Billboard singles chart. In 2011 Rolling Stone Magazine ranked it at #72 on their 500 Greatest Songs Of All Time list. The Rock and Roll Hall of Fame lists it as one of their 500 Songs That Shaped Rock And Roll.