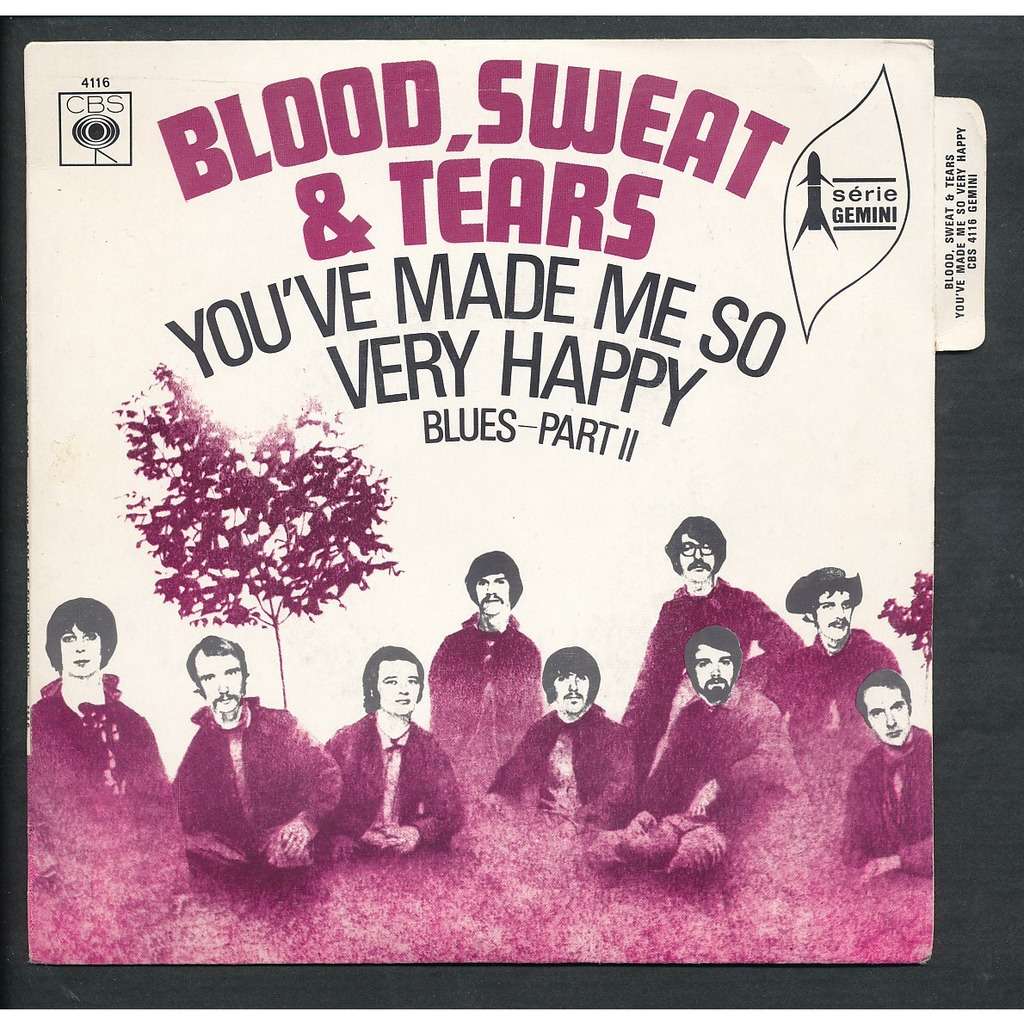 101. “”You’ve Made Me So Very Happy”- Blood, Sweat and Tears. Columbia. Jazz-Rock.Written by Berry Gordy Jr, Frank Wilson, Brenda Holloway and Patrice Holloway. B-side- Blues Part II. Blood, Sweat and Tears were formed in 1967 by legendary session man Al Kooper. It wasn’t until Kooper was replaced by singer David Clayton-Thomas for their second album released in 1968 that the band took off. The self-titled second album would go on to win the Grammy for Album of the Year and gave the band it’s three biggest hits all released in 1969- all of them reached #2 in the charts. Their first hit was this song “You’ve Made Me So Very Happy” #2  13 weeks on the chart. This was originally a Motown song- Brenda Holloway one of the writers had a minor hit with it #39 in 19688. Many have covered it then and in later years but it’s the Blood, Sweat and Tears version that was the monster hit. Blood, Sweat and Tears -was a pop -jazz fusion type group- like Chicago- Chicago’s producer James William Guercio produced this album. This album was the peak of Blood, Sweat and Tears popularity. They would have 10 Hot 100 singles with 6 reaching the Top 40- those were the first six singles after David Clayton-Thomas left that was the end of the big hits. Forgot to mention the other two #2 hits from 1969 “Spinning Wheel” and “And When I Die”- the group is still out there as a touring group their last album of new material was 1980. They have have the record for the number of band members over the years. Grade: A-. 103. “Galveston’ -Glen Campbell. Capitol.Country-Pop. Written by Jimmy Webb. B-side: “How Comes Every Time I Itch I Wind Up Scratchin’ You.”  Glen Campbell covering a Jimmy Webb written song was money in the bank in the late 60’s “By The Time I Get To Phoenix, Wichita Lineman and Galveston were three of the best singles of the era.
Galveston” went to #4 on the pop chart and spent 12 weeks in the Hot 100. Glen Campbell from 1961-81 had 38 Hot 100 singles with 22 reaching the Top 30 and 2 #1’s “Rhinestone Cowboy” 1975 and “Southern Nights” 1977. He was even a bigger success on the country charts. During his long career he won ten Grammy Awards. Grade: A+.