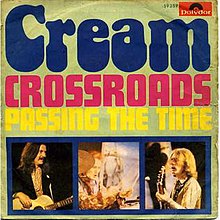 38. ” Crossroads [Live}’- Cream. Atco. Rock- Blues. Written by Robert Johnson. B-side “Passing The Time.”Cross Road Blues was a Robert Johnson original from 1936. Johnson is one of Eric Clapton’s guitar heroes and rightly so- and it was a natural for Cream to cover the song. Their version was recorded live at the Fillmore in San Francisco. Cream was the greatest super group ever- but they had a short shelf live- 1966-69 releasing four albums in four years. They were more of an album group than a singles group. They did place 5 singles into the Hot 100 with 2 big hits “Sunshine Of Your Love” #5 and “White Room” #6 both in 1968.  “Crossroads” would peak at #28 and spend 8 weeks in the Hot 100. Grade A+ 39. “Let It Be Me”- Glen Campbell and Bobbie Gentry. Capitol. Country. B-side ” Little Green Apples”  Written by Gilbert Becaud, Manny Curtis, and Pierre Delanoe. The Everly Brothers took this song to #7 back in 1960. Glen Campbell and Bobbie Gentry released a duet album in late 1968 and this single form that album made it to #36 on the Hot 100 spending 9 weeks on the chart. Campbell and Gentry would put three duet singles on the charts with two making the Top 40- the other one was another Everly Brothers cover- All I’ve Got To Do Is Dream #27 in 1970. Bobbie Gentry hasn’t released an album since 1971- pulling one of the great disappearing acts in music history. Mark your calendars for next Monday- June 3rd- “Ode To Billy Joe” Day.  Grade: C.