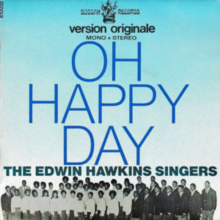 1969 Song of the Day is “Oh Happy Day” by The Edwin Hawkins Singers. Oh Happy Day was an 18th century hymn written by clergymen Philip Doddridge. The Edwin Hawkins Singers made the song a gospel arrangement and it became an international hit single for them- reaching #4 on the Billboard Hot 100 in the US. It went to #2 in the UK and #1 in Germany. Dorothy Combs Morrison sang the lead vocal.Edwin Hawkins was director, arranger and played piano on the song.  George Harrison would credit “Oh Happy Day” as a main inspiration for his “My Sweet Lord” which topped the charts in 1970.