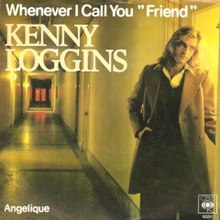 Songs I Like By Artists I Don’t. Whenever I Call You Friend”- Kenny Loggins with Stevie Nicks. How often can you kill two birds with one stone? With the expect of his Caddyshack song “I’m Alright”- I never cared for Mr 80’s Soundtrack -Kenny Loggins- and I am not a fan for the most part of Stevie Nicks- some of her Fleetwood Mac contributions are ok but only in small doses- I much prefer Buckingham and McVie’s songs- and singing. But I can’t help for some reason liking the 1978 #5 hit from Loggins and Nicks “Whenever I Call You Friend”- I bought the single back then- and still own it. The song was written by Loggins and Melissa Manchester.