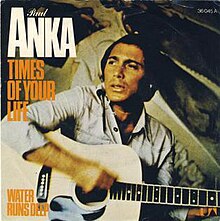 Songs I Like by Artists I Don’t- Times Of Your Life- by Paul Anka. Anka is a poor mans Neil Sadaka in my book- and that is pretty piss poor- you won’t find me listening to Neil Sadaka anytime soon. Anka wrote My Way and he had one of the worst #1 songs ever- and that is saying something with – You’re Having My Baby. In the late 50’s -early 60’s he had a big string of hits- and then The British Invasion silenced him until his comeback in the early to mid 70’s. I never heard a Paul Anka recording I liked- except one. It’s not like its a favorite or anything but- Times Of Your Life- isn’t bad. It is probably the former history teacher in me- and while I hate to admit such a thing  but I spend a lot of time living in the past- not so much my past but past history. Anyway this song which went to #7 in 1975 is most famous for being the song in a Kodak commercial. Again not a great song but I think it fills the bill as a song I like by an artist that I Don’t!