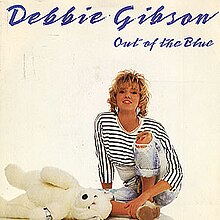 Songs I Like by Artists I Don’t- ‘Out Of The Blue”- Debbie Gibson. It’s not that I didn’t like Debbie Gibson- she does win the face off with Tiffany after all – but I just never payed much attention to her during her brief late 1980’s run of hits.  She had 9 Top 40 hits from 1987-91 all of them but one were on her hit albums- Out Of The Blue and Electric Youth. Two of the singles went to #1-“Foolish Beat” and “Lost In Your Eyes” I heard all of her hits because I was still listening to enough pop radio at the time. The only song of her’s that caught my attention was the title track of of her debut album “Out Of The Blue”  which went to #3 on the Billboard Hot 100 in 1988 as the 3rd of the eventually 5 hits that were on that album. A few years later I saw the album on the discount rack for $1 and had to pick it up for that song. I am sure I gave the album a couple listens but I only bought it for the one song. The song is by no means a work of musical genius but I think it is a good pop song. Certainly better than anything Tiffany ever did and hopefully she made enough money to buy herself some jeans without the big holes in the knees. I never understood that. I have a friend who is in his late 50’s and walks around in jeans that are full of holes and a Kurt Cobainish haircut. Come on, man.  I don’t know what that has to do about anything but Debbie’s holes in her jeans brought that to mind .