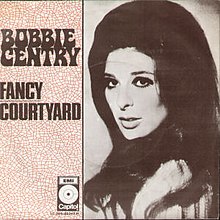 1969 Song of the Day is “Fancy” by Bobbie Gentry. Bobbie Gentry will forever be remembered for “Ode To Billie Joe”- what a great song/ record that was back in 1968- a number one hit- winner her a couple Grammy’s.  Everything she did was kind of overshadowed by that. She released seven albums from 1967- to 1971 and that was the end of that. In recent decades she has lived in a gated community- and has lived a very quiet laid back life. Last year a box set of her work was released to excellent reviews. I am not all that familiar with her albums- but I do know her handful of hits. Ode To Billie Joe would have to be on the Hans Hot 100 of all-time. Bobby Gentry had four Top 40 Pop hits- Ode To Billie Joe #1, Let It Be Me with Glen Campbell #36, “All I Have To Do Is Dream- also with Glen Campbell #27 and this song- Fancy #31.  Fancy was written by Bobbie Gentry- the song is about a woman who over comes poverty to become a successful- escort.

Here is what Gentry had to say about “Fancy” – Fancy” is my strongest statement for women’s lib, if you really listen to it. I agree wholeheartedly with that movement and all the serious issues that they stand for — equality, equal pay, day care centers, and abortion rights.